How did life on Earth begin? How did a world of inorganic molecules give rise to the first living thing?

No one really knows. There are many uncertainties and controversies. But a general picture is emerging as researchers from diverse fields put together different pieces of the puzzle. The scenario shown here is based on the metabolism-first theory that cells—the basic units of life on Earth—developed through natural processes along hydrothermal vents on the ocean floor.

The water and rocks around hydrothermal vents on the ocean floor are rich in minerals and chemicals that are known to combine into complex organic molecules—the basic ingredients for the chemistry of life.

Heat and chemical energy from the vents mix these organic molecules, producing various sequences of reactions, or chemical pathways. If nothing stops them, some of these pathways may run continuously, leading to new pathways that produce amino acids and other biological building blocks.

This process could lead to the beginning of metabolism, the chemical reactions that all living things use to produce the energy and components they need to interact with the environment, grow, and reproduce.

Our metabolic pathways need special molecules called catalysts to kick off chemical reactions and keep them going. In cells today, catalysts are large, complex molecules called enzymes, but small molecules like iron-sulfur clusters can serve the same purpose in a pre-cellular world. Iron-sulfur surfaces are plentiful around thermal vents, and they could provide the raw materials for these first catalysts.

How will these chemical pathways keep going—how will they persist—as they must if they are to lead to life?

Today, long sequences of RNA and DNA serve as the memory that preserves and transmits the patterns for these pathways. In our early biochemical world, large molecules like these don’t exist. But early chemical pathways could produce short chains of small molecules that are capable of preserving and transmitting some information. These short chains—named “tiny RNA”—might have been the earliest form of memory that enabled the pathways to persist.

Cells today have complex, active membranes containing walls, pores, and pumps that concentrate their chemical processes and control what comes in and what goes out. How can our simple metabolic pathways protect themselves and control their interactions with the environment before even the simplest cell wall has evolved?

The answer could lie in the many small cavities in the rocks around thermal vents. These cavities might provide the protection our developing collection of pathways needs. They may even provide a surface on which a greasy film lining begins to form—this lining could eventually develop some of the capabilities of a cell membrane, protecting the collection of pathways and allowing it to interact with the environment outside the cavity. 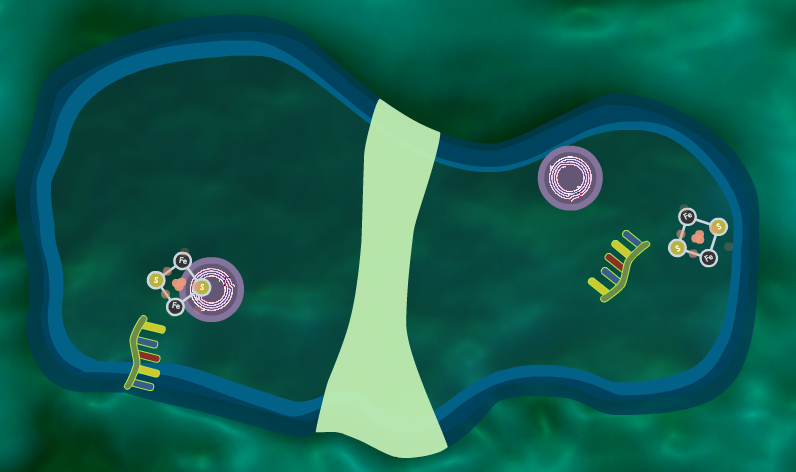 Our pathways and molecules are now enclosed in a membrane and working together. But to create a population that survives and grows, they need a way to reproduce as a whole. To gain this ability, the tiny RNA will need to evolve until it becomes complex enough to control a long sequence of processes that generates copies of itself.

Replication involves the coordination of all the processes that have been introduced so far—metabolism, catalysis, memory, and encapsulation. When all these processes can be controlled simultaneously, they can be combined into the single action of creating a new cell.